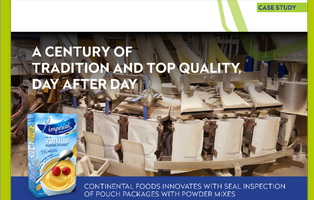 More than 100 years ago, Jeanne Verelst created the first Belgian recipe for powdered pudding preparation. Today, powdered desserts are still a classic in the Continental Foods range and millions of units are packed every year on state-of-the-art packaging machines. For the automated, 100% quality control of the seals of the pouches, Continental Foods recently switched from vision-based control to SealScope™ in-line seal inspection.

Continental Foods is one of Europe’s leading food companies with branches in Belgium, Finland, France, Germany and Sweden. The group has recently been acquired by GB Foods of Spain, serving an even larger, complementary market. The food group represents brands that are steeped in tradition and quality, with products that have been used daily in most kitchens for more than 100 years.  Well-known brands include Devos-Lemmens, Royco, Heisse Tasse, Liebig, Aïki Noodles, La Gallina Blanca, Blå Bland and Imperial. 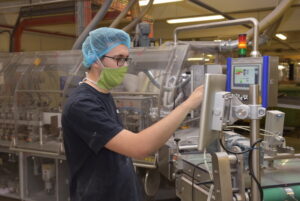 It is for these last two brands that Continental Foods, based in Puurs, looked for a new inspection solution that better detected open or leaking paper pouches. These individual packages are typically packed in a carton of six. If certain pouches are not 100% closed after filling, there is a high risk of contamination further along the packaging line, resulting in production stoppages and clean-up actions. If an open package slips past the quality control and is still delivered, there are additional risks of faster spoilage and damage to reputation if the consumer is confronted with a box with a powder film due to open pouches. Bart de Bont, Engineering Manager at Continental Foods, confirms: “It is extremely important that open or leaking pouches are detected and removed from the packaging line.“

Dust – the enemy of a camera inspection system

Continental Foods processes the pouches on state-of-the-art HDG rotary pouch machines. Three pouches are simultaneously opened, then filled and finally sealed at different stations. At the end of the line, there is a reject system where defective packages are removed from the conveyor belt. Initially, the seal inspection was handled by a camera system, which analyzed the number of ridges in the seal and -based on this analysis- approved or rejected the pouch. However, the fine dusting powder contaminated the camera lens, resulting in too many faulty analyses with unnecessary rejects or failures to emit defective packages. In order to cleanse the camera lens, the line had to be stopped each time, resulting in considerable production downtime. The camera was also mounted just before the ejector system, which often meant that the response was too late to remove a faulty package.  In practice, the camera was often turned off and then replaced by manual inspection. In order to implement a fully automatic, in-line inspection system, Continental Foods was therefore looking for a new, more robust solution. At the same time, it was decided to invest in a new packaging machine due to increased capacity requirements.

Read the full case story by downloading the pdf

This website uses cookies to improve your experience while you navigate through the website. Out of these cookies, the cookies that are categorized as necessary are stored on your browser as they are essential for the working of basic functionalities of the website. We also use third-party cookies that help us analyze and understand how you use this website. These cookies will be stored in your browser only with your consent. You also have the option to opt-out of these cookies. But opting out of some of these cookies may have an effect on your browsing experience.
Necessary Always Enabled
Necessary cookies are absolutely essential for the website to function properly. This category only includes cookies that ensures basic functionalities and security features of the website. These cookies do not store any personal information.
Non-necessary
Any cookies that may not be particularly necessary for the website to function and is used specifically to collect user personal data via analytics, ads, other embedded contents are termed as non-necessary cookies. It is mandatory to procure user consent prior to running these cookies on your website.
SAVE & ACCEPT